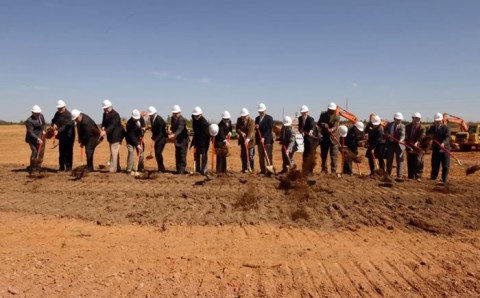 After more than eight years of work by regional officials and years of wrangling with bureaucratic regulations, leaders finally broke ground at the 3,500-acre Berry Hill Industrial Park on Thursday afternoon.

The groundbreaking ceremony was for phase one development — grading — of a 133-acre site at the park.

For local, regional and state officials who attended the event in southwestern Pittsylvania County, the moment was a long time in the making, arriving after years of struggle against a “Catch-22” rule from the U.S. Army Corps of Engineers. The corps would not issue a permit for the site if there were no committed industries, but the park could not attract committed companies unless it already was permitted and ready for development.

Virginia Secretary of Commerce and Trade Todd Haymore — a Dan River Region native — spoke at the event, along with local, regional leaders and those from North Carolina.

“In my 10 years in state government, this is the best groundbreaking I have ever been to,” Haymore told attendees.

Thursday’s groundbreaking shows what perseverance and patience will do, he said.

Gov. Terry McAuliffe has talked of building a new Virginia economy less dependent on federal dollars, especially after sequestration cost the state thousands of jobs, Haymore said. Sites like the Berry Hill park are one way of diversifying the economy of the commonwealth, he said.

Haymore called the site and the park another economic development tool to grow the region’s and the state’s economy. 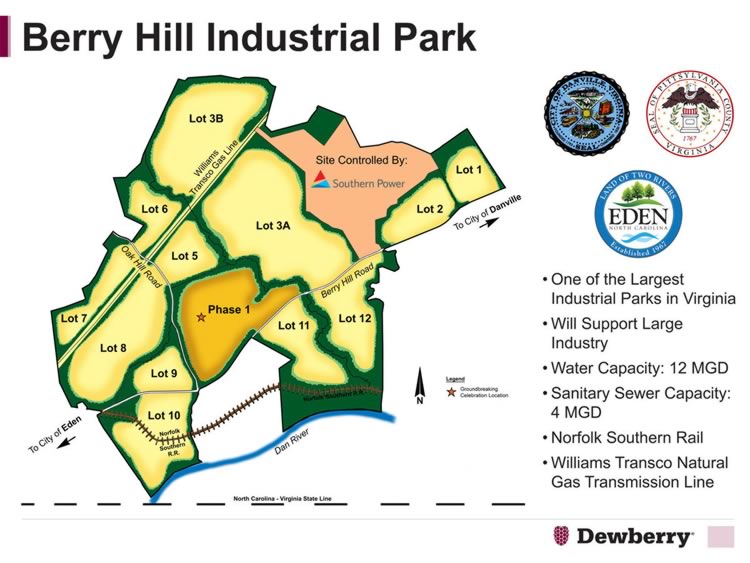 Officials hope to attract major industries to the park creating thousands of jobs for residents in Southside Virginia and northern North Carolina.

“This industrial park is an essential building block in the future of southern Virginia and northern North Carolina,” Saunders, a Danville city councilman, said Thursday. “Today, we are here to celebrate a milestone in its development.”

Since the mega park project began nearly a decade ago, the Virginia Tobacco Commission has awarded about $29.8 million in grants for site development and infrastructure at the industrial park.

Saunders pointed to partnerships formed around the park that have remain in place — state of North Carolina, the Golden Leaf Foundation, and the city of Eden, North Carolina, dedicated funding toward water and sewer infrastructure that will serve the park, he said.

Virginia and the tobacco commission provided money for site development and infrastructure improvements, he said. 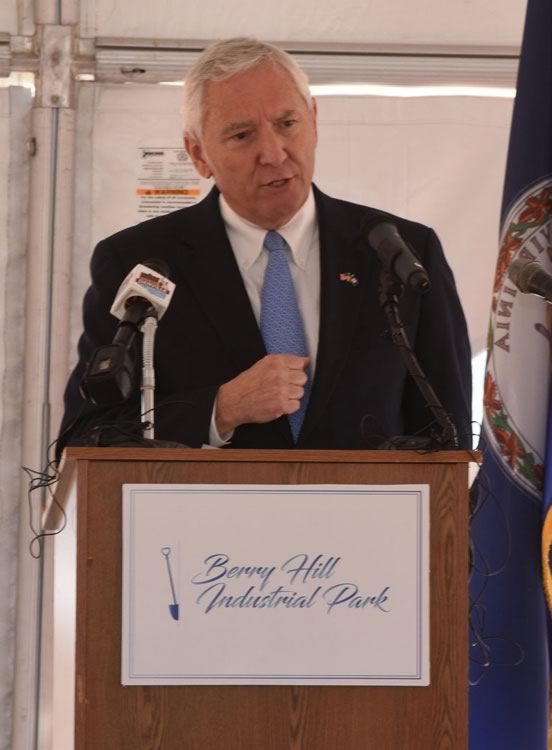 After over eight years of work, the ground was officially broken for the Berry Hill Megapark Thursday. Delegate Danny Marshall noted that the Virginia Tobacco Commission has given $29.8 million to the project to date. Delegate Danny Marshall, R-Danville, who chairs the Special Projects Committee for the tobacco commission, compared the groundbreaking and upcoming grading to a farmer planting seeds to grow crops.

“We’re going to grow jobs,” Marshall said during the ceremony.

“It is all about jobs,” he added. “The vision and long-term planning for Berry Hill are coming together to create major moves in economic development for our region.”

The committee helped provide the $29.8 million for the project.

At 3,500 acres, the mega park is the largest in the state and the fifth largest on the East Coast, Marshall pointed out.

Danville Mayor John Gilstrap echoed Saunders’ and Haymore’s statements about the region’s perseverance in getting the park permitted.

“The journey to this point has had many twists and turns, but we never wavered,” Gilstrap said.

With a graded site, “we’ll be able to show industrial prospects a site that is construction-ready,” he said. It’s another step in efforts to diversify the region’s economy, Gilstrap said.

Pittsylvania County Board of Supervisors Chairman Robert “Bob” Warren credited former supervisor Coy Harville, who represented the Westover District and served on the RIFA board, for envisioning the Berry Hill park project years ago. Harville also attended the event.

Warren said the groundbreaking was symbolic.

“Pittsylvania County is both honored and humbled to have been entrusted by our regional and state partners to host the location of this site, and values its relationship with the many stakeholders and individuals that have been involved in getting us to this momentous occasion,” Warren said. 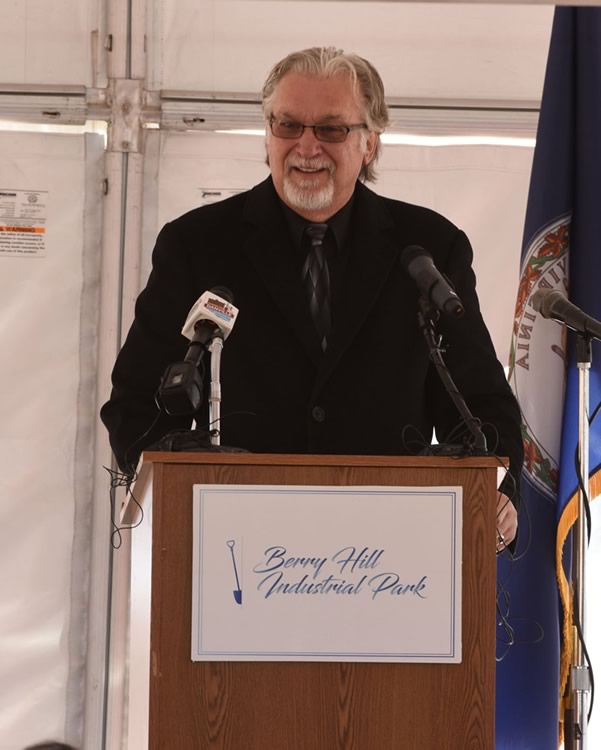 “It has been a wonderful thing and today it all comes to fruition,” Tuggle said. “The citizens of our region will be the ultimate winners.”

Artificial state lines should not separate what is best for citizens, Tuggle added.

Southern Power — a subsidiary of Southern Co. — signed a purchase and sale agreement option in June 2016 with RIFA for 300 acres in the park. That land and project are separate from the 133 acres.

The potential for a Southern Power plant in the Berry Hill Mega Park moved a step closer to reality Monday when the Danville-Pittsylvania Regional Industrial Facility Authority voted to extend its “due diligence” period by six months.

At that time, RIFA announced the company would invest at least $250 million.

The chosen site is adjacent to the Williams-Transco natural gas intercontinental pipeline, which runs through the mega park site and transports natural gas from the Gulf Coast to the northeastern and southeastern states.

Grading of the 133-acre site at Berry Hill mega park will be a “game-changer” that will make the 3,500-acre park more competitive, officials have said.

The RIFA board — which includes members of Danville City Council and the Pittsylvania County Board of Supervisors — voted Feb. 24 to approve a resolution accepting a $3.77 million bid from Haymes Brothers Inc. in Chatham for the project.

RIFA will pay for the project with money from the Virginia Tobacco Commission.

The project includes site grading, erosion and sediment control, site stabilization, clearing and grubbing, and storm water management. The site includes four pads, the largest of which is 109 acres.

The contractor will have 360 days to complete the project that will make a level, buildable site for development.

A graded site will shorten the time it takes for a business to be operational if they’re looking for a new location, officials have said.

from GoDanRiver.com, photos by Matt Bell